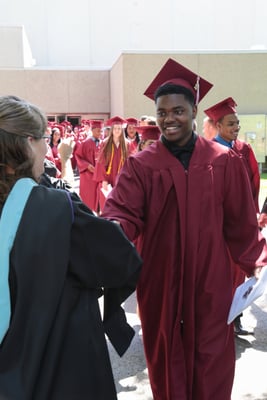 The Free Enterprise Academy (FEA) at Milwaukee Lutheran High School provides students with the resources and education to think freely about the principles of economics, personal finance, and entrepreneurship while at the same time using a historical lens to understand free markets through the constructs of capitalism versus other economic models. All students at Milwaukee Lutheran participate in coursework provided by the Free Enterprise Academy, and students with a passion for this field of study can pursue additional coursework in Economics, Accounting, Business, Entrepreneurship, and Digital Media. It is the mission of the Free Enterprise Academy to challenge students to think critically about free markets, business as an enterprise, the role of the government in an economy, and to be financially literate.

The goal of the Free Enterprise Academy is to produce graduates who can use their God-given skills to be leaders in producing wealth, prosperity, enterprise, and a legacy of improving their financial standing for themselves and their communities.

Courses to choose from:

FEA in the News 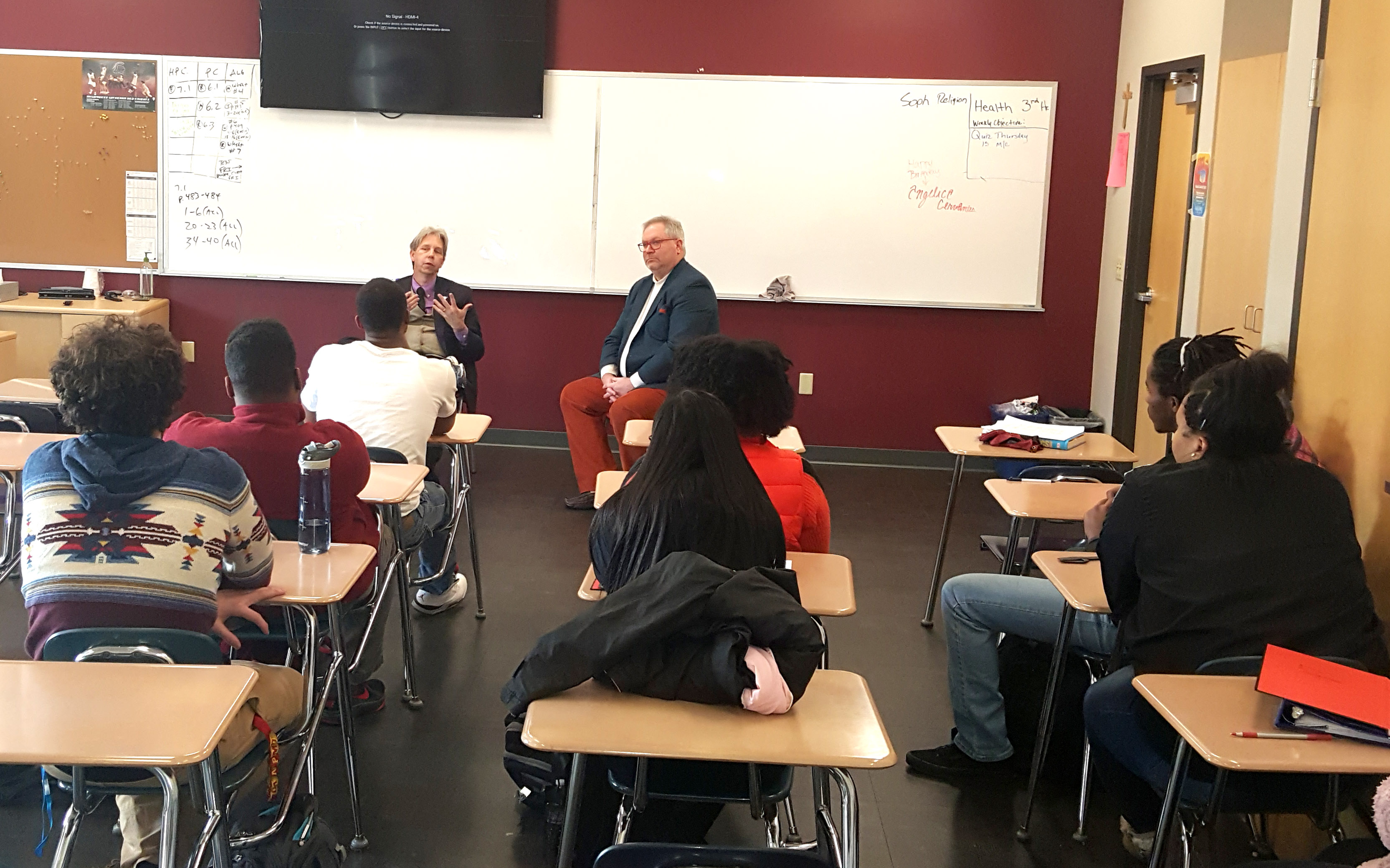 Doug Braun of Blujay Solutions and Dr. Borst discuss a wide range or economic and entrepreneurial topics in the Business Success Course, from the rise of the popularity of socialism, to having a passion for your chosen field of business.

Graduating from the University of Wisconsin Law School in 1996, he has spent the last three years as an Ozaukee County Assistant District Attorney. Significantly, Shannon spent twelve years as a commercial litigator and business law attorney at a top-rated business law firm in Milwaukee. He also has years of experience in the areas of Child Support Enforcement, Insurance Law, and General Practice.
During his practice of law, Shannon also had the opportunity to serve as a Fellow in Law & Public Policy with the Wisconsin Institute for Law & Liberty (WILL). Shannon was also a member of the Wisconsin Chapter of Entrepreneurs Organization ("EO").
Originally from Ann Arbor, Michigan, Shannon was named a National Achievement Semi-Finalist in high school, designating him as one of the top 10% of African-American students in the country. He also lettered in football, wrestling, and track. He went on to Macalester College in St. Paul, Minnesota and graduated in 1992 with a triple major in History, Political Science, and Law & Society, while being a four-year starter in football and track.
Shannon has taken the opportunity to serve on boards of organizations that address issues to improve our Milwaukee communities, which include:
Shannon is married with two small children.  Shannon's wife earned her PhD in French and Applied Linguistics, and has served as a Professor of French at the University of Wisconsin-Milwaukee. Shannon has also served as his son's Cub Scout Den Leader and remains involved in various local community efforts.

Dr. David Borst now brings his extensive and extraordinary time and talent to Milwaukee Lutheran High School, continuing to improve the quality and depth of the education being offered to the students who now walk its’ halls.  Dr. Borst is the former Dean of the School of Business at Concordia University-Wisconsin (Ret.), and is currently the COO/ED of the Family Business Legacy Institute.  He is also owner of five companies under the label of Borst: The Brand.  After retiring as the Dean of the School of Business, Dr. Borst started up companies that mentor, make pocket squares, and buy and sell colleges and schools.  Dr. Borst is known as Dr. Dave on WTMJ radio’s “All Business” every Saturday morning at 6:20am.  He is also the education expert for the station, frequently appearing on other WTMJ shows as the news warrants.  Additionally, Dr. Borst is the Chairman of the Board at ITA, a choice school in Milwaukee, where he also coaches the men’s and ladies’ basketball teams.

Dr. Borst will begin developing dual credit courses in Economics and other Free Enterprise courses at MLHS, for which Free Enterprise Academy students will be able to receive college credits while in high school.  He will also assist in curriculum development, facilitating entrepreneurial skills courses, and teaching Personal Finance.

Billy Bynum is a 2002 Graduate of Milwaukee Lutheran High School who has returned to educate and enrich the lives of the young minds who now walk the halls of his Alma Mater.   Having gone on to graduate from Concordia University-Wisconsin (CUW), Mr. Bynum participated in both basketball and baseball there, before returning to MLHS in 2006.  Mr. Bynum has taught Business Education, Accounting 1 & 2, Business Essentials, Business Management, Personal Finance, Applied English, Computer Applications, Media Production & Analysis, Creative Web Design and Keyboarding.  In addition, Mr. Bynum assists students with Lutheran Printing Services, a business run out of MHLS.

Mr. Bynum has been the Business Education Department Chair since 2010, and in 2015 earned a Graduate Certificate in Digital Age Teaching and Learning.  He also serves on the Technology Advancement Team at MLHS, which successfully implemented the use of Office 365 in in the 2015-2016 school year and is now in the process of implementing Schoology as MLHS’ new learning management system.  Demonstrating his commitment to continued learning and education in May 2018, Mr. Bynum earned his Masters in Educational Design and Technology from CUW.

Married to his wife Autumn at CUW in the Chapel of Christ Triumphant, Mr. Bynum now has three small children who renew his faith and passion for educating youth and fostering their potential.

Originally from Connecticut, Philip Koch has a long lineage of family members who have attended Milwaukee Lutheran High School before he began educating students there in 2005.  Having earned his Bachelor of Arts degree in History and Political Science from the University of Wisconsin and his Master of Arts in Teaching from the University of Michigan, Mr. Koch has taught a variety of courses at MLHS including Economics, US History, AP US History, Government, AP Government and AP Micro/Macroeconomics.    Mr. Koch has also served two years as the Assistant State Director of National History Day in Wisconsin.

Married to his wife Laura and with two small children, Mr. Koch has developed a passion for civics education and helping young minds understand our governmental structures and the free market systems which can be used to serve their needs and better the lives of people from all walks of life and levels of society.

As an officer in the U.S. Army, Maj. Plumley commanded units in both the United States and Germany, specializing in logistical support. For one project, Maj. Plumley planned and supervised the complete renovation of a restaurant at a planned cost of $600,000, which was completed early and 10% under budget. While serving as a logistical officer for a light infantry division, the division was able to successfully complete its evaluation with an outstanding rating in logistical support. Based on his work, Maj. Plumley wrote
an article (“Parallel Planning”) about his planning and execution of the project that was published in the Army Logician magazine. The article was then incorporated into the Canadian Command and General Staff College curriculum.

Maj. Plumley’s final assignment in the Army was teaching logistics at the Command and General Staff College, teaching graduate level logistics to officers. Maj. Plumley also taught one of the first courses for operations other than war, which involved planning support operations for disaster relief and humanitarian support.

After retiring from the Army in 1995, Maj. Plumley taught JROTC at Hamilton High School in Milwaukee from 1995 to 2013. During this period, the program was awarded Honor Unit with Distinction every year except one. Maj. Plumley’s cadets were involved in numerous community service projects, Color Guards, and support activities. Cadets also volunteered for an after-school activity called Hamilton Helping Hands (“HHH”), which collaborated with students with special needs. Through HHH, cadets organized community service projects, designed and participated in fundraising events and camping trips. The group was recognized by the University of Wisconsin-Madison and was awarded a $5000 grant to continue operations.

Maj. Plumley has also taught college level courses at technical schools, including courses in group dynamics. Some of these courses also provided instruction on how to prepare and write research papers.

Teaching since 2012, Josh Shaffer brings his experience to Milwaukee Lutheran High School in the fall of 2018, teaching U.S. History. As part of the Free Enterprise Academy curriculum, Mr. Shaffer will be incorporating economic history and episodes in American history, into his courses. Having earned his Bachelor of Arts Degree in History and Political Science (Cum Laude) from UW-Stevens Point in 2009, Mr. Shaffer went on to earn is Master of Arts Degree in History at Virginia Commonwealth University (VCU) in 2015. A published author and accomplished presenter, Mr. Shaffer began his teaching experience at all levels even before he completed his Masters’ Degree, notably spending two years at St. Marcus School in Milwaukee prior to coming to MLHS.

Mr. Shaffer loves the study of History and is an avid reader. He is also an accomplished runner, having run cross-country and Track & Field in college, and completing his fifteenth marathon shortly after coming to MLHS. He is married and has a beautiful young daughter.

Rachel Vonderheide begins her new career of shaping young lives at Milwaukee Lutheran in the fall of 2018, teaching Personal Finance and Financial Literacy.  Having earned her Bachelor’s Degree in Business Administration from Wisconsin Lutheran College (WLC) in 2010, Miss Vonderheide spent two years working in the private sector before returning to WLC as an admissions counselor.  During her second stint at WLC, she earned her Master of Arts Degree in Leadership & Innovation.  In that time, Miss Vonderheide also took a year to run her own direct sales business (selling chocolate – yum!), a successful enterprise which, among other things, earned her a free trip to Jamaica based on her stellar performance.

In her down time Miss Vonderheide loves being active in the community, serving as a big sister for Big Brothers Big Sisters, granting wishes to children through the Make A Wish Foundation, and serving as a foster home to pets in need though the Wisconsin Humane Society.

The world has never seen another system that has done more good, fostering economic growth, creating jobs and individual opportunities thereby lifting millions out of poverty than Free Enterprise. Our Capitalistic system is a fundamental component of the American Spirit and success, thus worthy of celebration and study.

Keep up-to-date on the latest news and events at Milwaukee Lutheran.